Broadcast live of The 50th Anniversary Memorial Service of the Founder of Brazilian Buddhism, Ibaragi Nissui-Shonin

Broadcast live of The 50th Anniversary Memorial Service of the Founder of Brazilian Buddhism, Ibaragi Nissui-Shonin

Today, on November 1st, from 8:00 p.m. in Japan, we will connect the main hall of Yusei-ji Temple (Honzan) to Taisen-ji Temple in Brazil, and we will hold a memorial service to commemorate the 50th anniversary of the founder of Brazilian Buddhism, Ibaragi Nissui-Shonin, in conjunction with the Koso-e of Taisen-ji Temple in Brazil, and broadcast it live.
He was a great priest who introduced Buddhism to South America and Brazil, a pioneer of international propagation of Buddhism in Honmonbutsuryu-syu(HBS) and a legendary figure in the history of Buddhism.
We have been preparing frantically for this event, and now it's less than 4hours before the ceremony.
It will be broadcast live at 8:00 p.m. Japan time, but at 8:00 a.m. Brazil time, 6:00 a.m. EST, 3:00 a.m. in Los Angeles during Daylight Saving Time until the first Sunday in November, 1:00 a.m. in Hawaii, 4:30 p.m. India time including Sri Lanka, 12:00 noon in Italy, at 9:00 p.m. on November 1 Australian Eastern Time including Brisbane.
Ibaragi Nissui-Shonin arrived in the port of Santos on June 18, 1908, aboard the “Kasado Maru”, the first Japanese immigrant ship from Japan to Brazil. He was the first to introduce Buddhism to Brazil in South America.
This year, on the eve of the 50th anniversary of his death, the city of Sao Paulo officially recognized him as "Padroeiro, the first founder of Brazilian Buddhism," and June 18, the day he arrived in Santos, was designated as Ibaragi Nissui-Shonin Day. It was an indescribable accomplishment and a precious thing.
Today, the 50th anniversary of the Nissui-Shonin's death will be celebrated online by the 26th Head Priest of HBS, Takasu Nichiryo-Shonin.
This is a great Buddhist memorial service that will be broadcast live to the entire world. It is being rehearsed repeatedly. It will be a great memorial service to unite Japan, Brazil, and the world by circling the globe. There is even a 15-second delay on the Internet, but we will make full use of HBS's filming, broadcasting and communication technologies to bring you joy.
By making full use of Japanese and Portuguese subtitles, anyone can make a pilgrimage. We hope that everyone in Japan will be able to use the Internet to pay their respects.
Due to the spread of the Covid-19, traveling to Brazil with Takasu Nichiryo-Shonin and Japanese HBS members have been cancelled, but through this process of trial and error, we prepared an online service that unites the world in order to fulfill Buddha’s wishes and to bring Nissui-Shonin joy.
Let us learn about the dedication of Ibaragi Nissui-Shonin, who first introduced Buddhism to Brazil and propagated the Odaimoku of Jyogyo-Shoden in the midst of hardship and hardship, and come in contact with the current HBS members in Brazil and unite the entire world with the voice of the Odaimoku.
『Broadcast live of The 50th Anniversary Memorial Service of the Founder of Brazilian Buddhism, Ibaragi Nissui-Shonin』
Date and time: Japan time - Sunday, November 1st, 2020 starting at 8 p.m. / ending at 10:30 p.m.
Brazil time - Sunday, November 01, 2020 starting at 8 a.m. start / ending at 10:30 a.m.
Connection URL: https://youtu.be/harmHsTeWDo 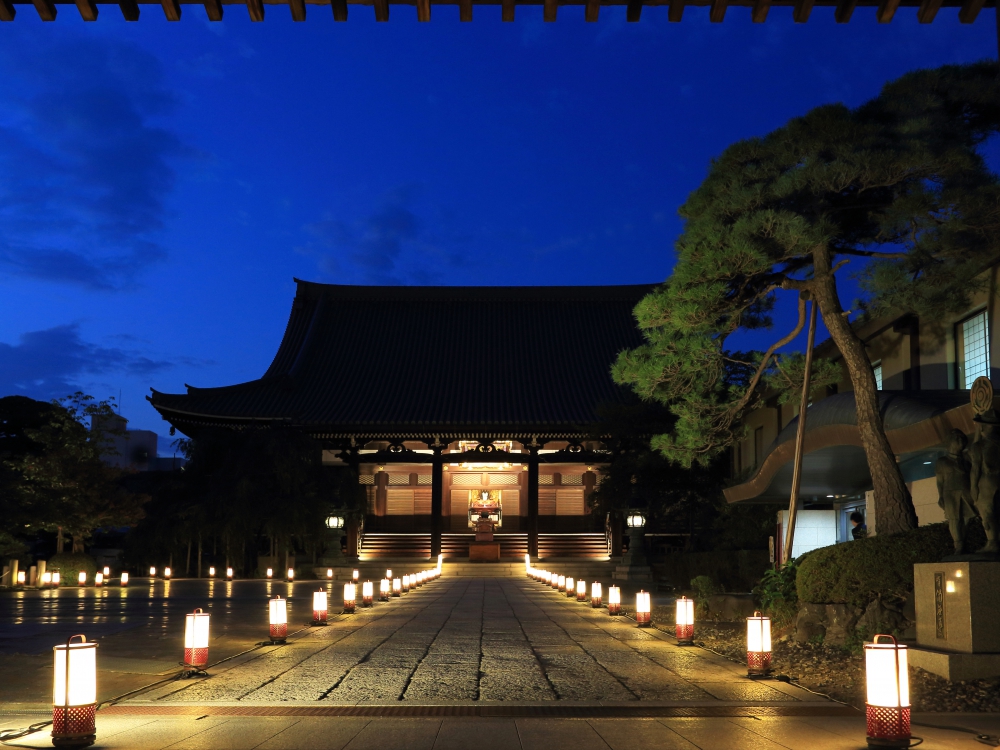 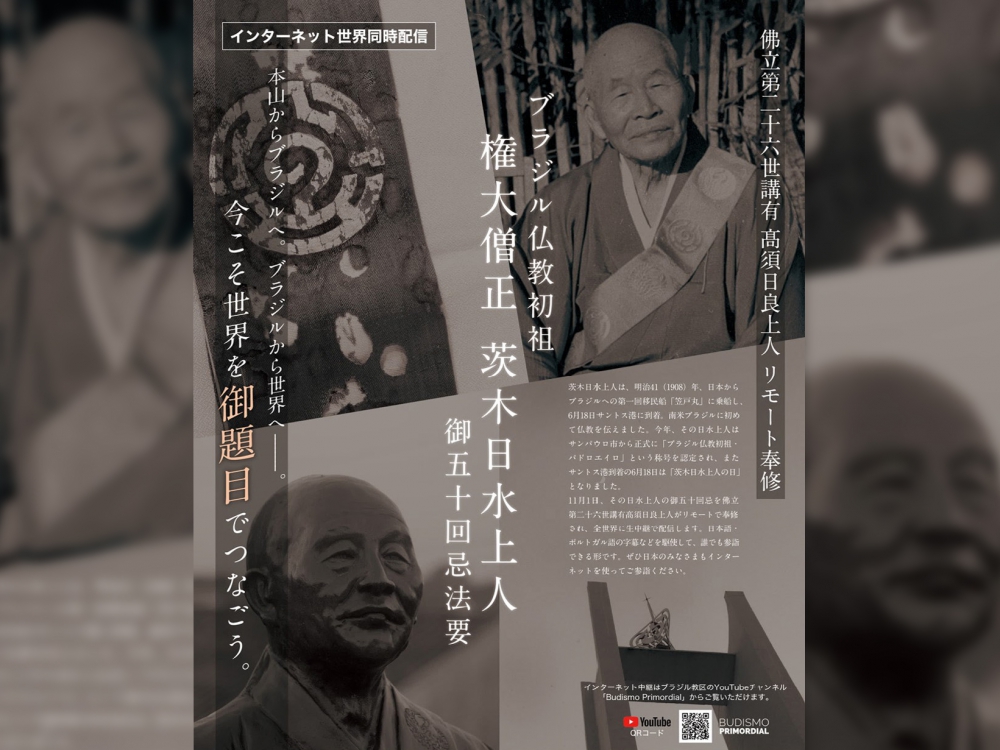 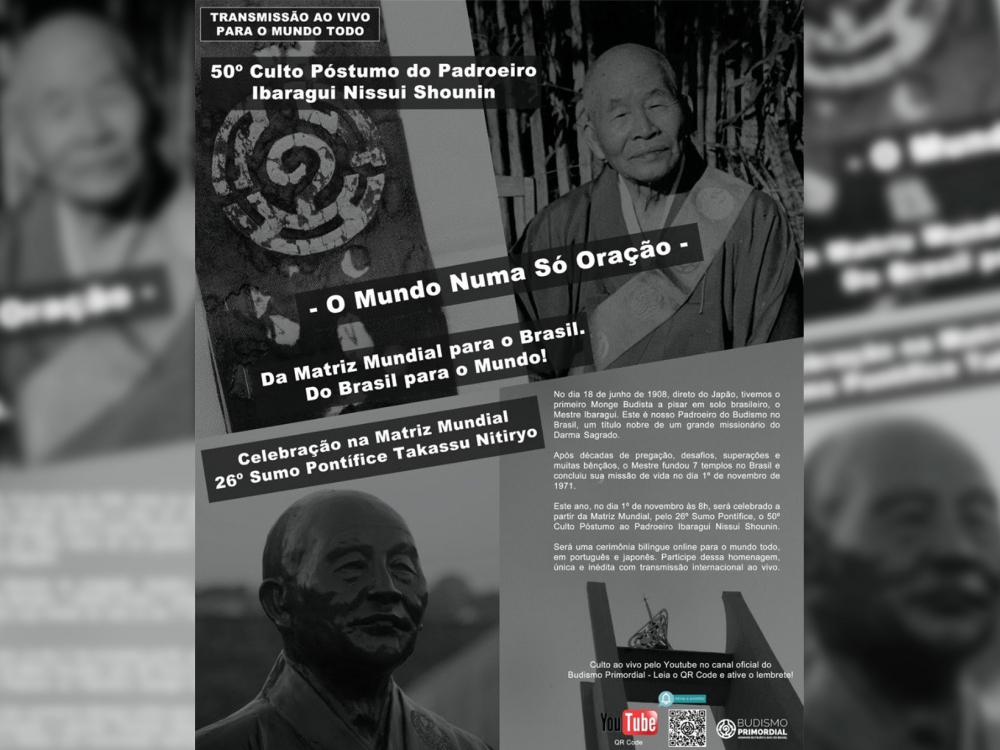